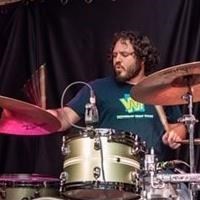 Daniel Paschall was born in Exmore, VA.  Since everyone on his father's side of the family was a musician of some sort, and since he wasn't "in" with the "cool kids" at school (at least one fraction of every musician's life story), he decided to occupy his time learning an instrument.

He gravitated toward the drums because he found hitting things to be very therapeutic.  From age 11 onward he developed his talents to the point to where he started gigging with various bands around his hometown whilst studying percussion formally with Berklee graduate, Billy Barton.  After high school he relocated to Atlanta to study at the Atlanta Institute of Music.

Over the last decade plus, he has worked/played/recorded/toured around Atlanta and elsewhere with a diverse list of artists such as Col. Bruce Hampton Ret., Ike Willis (FRANK ZAPPA, '78-'88), Tony McAlpine, Kevin Scott, Emil Werstler (VERLORENER, CHIMAIRA, DAATH), Keith Jenkins (musical director for JAMES BROWN), GA PLAYERS GUILD as well as original projects such as Twin Criminal, From Exile, Alex Gordon hi-fi,...along with a wealth of other talented artists around town.  He has also provided his services to various theater productions around Atlanta including the Georgia Renaissance Festival.

He has also built up a hefty teaching schedule over the past decade.  He teaches according to the student, for no two students learn the same way.  He balances what they want to know (ie., favorite songs, how to play cool drum fills, etc.) with what they need to know (ie., basic reading, rudiments, etc.). He also has experience teaching children with special needs/disabilities such as Autism, Asperger's and Tourette's.