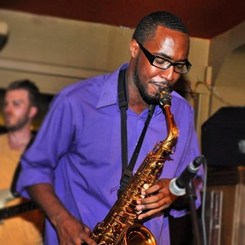 I began my academic and musical pursuits at Abingdon Elementary School, in Abingdon, Maryland. In the fourth grade, the school asked if I would like to play an instrument.  My parents thought it best if I play the trombone, due to the fact that my entire family played it, plus they did not have to buy one since there was already one in the house.  I had heard the soulful sounds of the saxophone on the radio while riding in the car with my grandfather; he had me listening to jazz growing up. So with my parents support and permission I picked up the alto saxophone and haven’t put it down since.

I continued playing at Edgewood Middle School, where I first began to play jazz, participating in the jazz ensemble as well as the concert band.  While in middle school, participated in the TWIGS (To Work in Gaining Skills) program at the Baltimore School for the Arts, the All State Solo and Ensemble Competition, and a middle school band competition in Jackson, New Jersey.  But school wasn’t the only venue I took part in; I played with the music ministry at my church at the time, Faith Baptist Church in Baltimore, Maryland.  In the summer of 2004, I picked up a tenor saxophone for the first time, when attending the McDaniel College Summer Band Camp.  They were short on Tenor sax players so I figured it would be a great time to learn, plus there were no more slots for alto saxophones.  After passing the audition, I was placed in the advanced level jazz and concert ensembles, and I’ve been playing the tenor saxophone ever since.

Although I was accepted to the Baltimore school for the arts, I first picked up the flute in my high school concert band at Archbishop Curley High School in Baltimore, Maryland. I also played alto saxophone in Archbishop Curley’s Jazz Ensemble and Jazz Combo, which has put out three jazz recordings and one concert band recording; two of which you will find me on. I have competed and won many competitions, locally, nationally, and internationally, as a solo performer as well as with the Curley Ensembles. I currently play for several churches & choirs and for different occasions and venues, including weddings, funerals, and as a guest artist with various bands and performers. As of right now I have received my bachelors of science in music from Florida A&M University, where I held the position of rank sergeant in the Incomparable “Marching 100” Marching Band, played first and second alto in the jazz ensemble, as well as participating in the saxophone ensemble and wind symphony.  I am a horn player at the Church of the Redeemed of the Lord in Baltimore, MD. I am a interim member of The Mo’ Horns, a group of instrumentalists used to play for high level performers such as Jay-Z, P-Diddy, Beyonce, and many famous gospel choirs. So Far I have opened for Marvin Sapp. I currently play on a Selmer Reference 54 hummingbird w/ a Meyer hard rubber mouthpiece (alto), and a Cannonball Raven w/ a Otto link hard rubber mouthpiece (tenor).

I am more than happy to assist with anything that can in order to promote success in music.