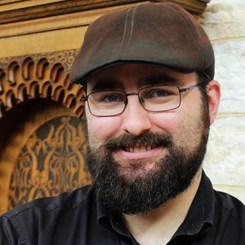 Information is not Knowledge,
Knowledge is not Wisdom,
Wisdom is not Truth,
Truth is not Beauty,
Beauty is not Love,
Love is not Music,
and Music is the best.
- Frank Zappa

I started playing music with piano lessons at a very young age, then switched to Clarinet in the fifth grade. When I got to high school (Worthington Kilbourne High School in Worthington, OH), I expanded my musical experience, playing clarinet in the Marching Band & Pep Band, bass clarinet in the Symphonic Band and Wind Ensemble, baritone saxophone in the Jazz Band, and snare drum, marimba, and xylophone in the Percussion Ensemble.

Although I didn't graduate with a music degree, music was an essential part of my college experience, in addition to my experiences with various performing ensembles, I became a member of Phi Mu Alpha Sinfonia, the oldest national mens music fraternity.