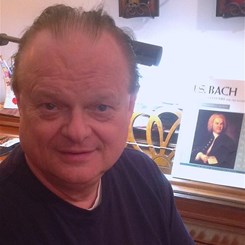 Since making his debut with the Arizona Opera in 1979, David Majoros has been consistently commended by critics for his exceptionally beautiful, versatile voice and his dramatic artistry in performance. “Opera News” praised his “beautiful baritone, passionate musicality and charismatic acting” as Belcore in Donizetti’s “L’Elisir D’Amore” with the Arizona Opera, while the “Tucson Citizen” pointed out his “big, flawless voice and impeccable dramatic instincts” in his warm portrayal of Sharpless in Puccini’s “Madama Butterfly.” He has also appeared with Wolf Trap Opera, on tour with the Minnesota Opera, Verismo Opera, New Rochelle Opera, Taconic Opera, and Regina Opera, starring in such leading roles as Scarpia in Puccini’s “Tosca,” the title role in Verdi’s “Rigoletto,” Figaro in Rossini’s “Il Barbiere di Siviglia,” the Count in Mozart’s “Le Nozze di Figaro,” Tonio in Leoncavallo’s “I Pagliacci,” Horace Tabor in Moore’s “The Ballad of Baby Doe,” and the Toreador in Bizet’s “Carmen.”

Dr. Majoros developed and produced a one-man (plus piano accompanist) show as Charles Ives, the American composer, which features Ives coming out on stage, talking about his life (and musical life in general) and singing 20 of his songs. He performed this Ives extravaganza over 30 times for major universities and arts societies across the nation. (See his website, charlesivesportrait.com)  He is currently working on a sight-and-sound 3-evening recital (with expositional lectures) project focusing on the three song cycles of Franz Schubert.

A native of Charleroi, Pennsylvania, he holds the Doctor of Musical Arts degree from the University of Arizona, where he studied with Eugene Conley. He taught voice on the faculty of the School of Music at the University of Arizona and also served there as Assistant to the Dean of the College of Fine Arts. He currently serves as Director of Music for the Farmingdale United Methodist Church and teaches voice and piano with Music and Arts in Farmingdale, New York.