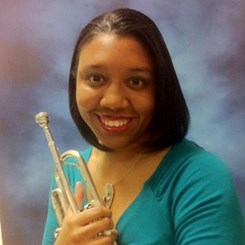 Dawn Wilson is a gifted and talented young lady from Silver Spring, Maryland. Ms. Wilson is now a middle school band director in Alexandria, VA. She has earned a Master’s degree in Music Education from Howard University in Washington, D.C on May 10, 2014. She earned her Bachelor’s degree in Music Education from Grambling State University in Louisiana on May 2010. Ms. Wilson started to play the trumpet when she was 10 years old and has not stopped since then. She also plays the cornet, flugelhorn, piccolo trumpet, and teaches brass instruments to young aspiring musicians.

Her involvement and talent has earned her several musicianship awards and scholarships over the years. In April 2009, Dawn Wilson became the first African American woman to earn the Conrad Hutchinson Award for Outstanding Musicianship at Grambling State University. Years later on December 2013, Dawn was a recipient for the Gladys Stone Wright Scholarship from the prestigious Women Band Director's International (WBDI) Organization.

Ms. Wilson’s professional affiliations include being a member of Tau Beta Sigma, National Honorary Band Sorority, Inc., Sigma Alpha Iota, International Music Fraternity for Women, and the National Association for Music Educators (NAfME). In 2013 and 2014, Ms. Wilson has also earned the privilege of traveling to Vienna, Austria and Siena, Italy to study music and perform chamber repertoire for two consecutive summers while attending Howard University. The following September in 2015, Ms. Wilson was invited to teach music at the police academy in Abu Dhabi, UAE.

In the future, Dawn Wilson has aspirations to earn a Doctorate in Music and become a college music professor. Ms. Wilson’s ultimate goal is to inspire her students through music and become a music ambassador.