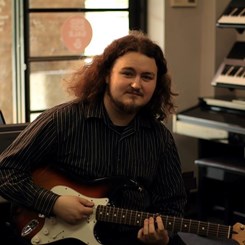 The first moment I realized that I wanted to be a musician, was in fourth grade after a school project on Louis Armstrong. Ever since, I've been obsessed.

I played in middle and high school symphonic bands for seven years playing the Baritone, Euphonium, Tuba, as well as the Sousaphone in the Watkins Memorial HS Marching Band, where we competed in OMEA State Competition all four years.

I’ve also been playing guitar and bass for over ten years, performing in numerous Rock, Punk, and Metal bands, as well as playing as a session musician on a number of different recording projects. More recently, I’ve been performing in a band called Pale Grey Lore, that has played throughout the Midwest. Our first album was released by Oak Island records in the Fall of 2017, and our second was released on Detroit Label Small Stone records September of 2019.

If you’re looking for guitars, basses, effects, amps, or any other gear, I’m your guy. Stop in if you have any questions, I’d be happy to help you out.