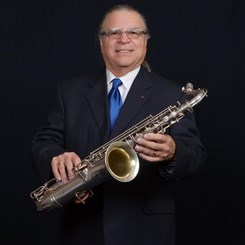 IN EXCESS OF $250,000.00 CURRENT SCHOLARSHIP AND GRANT MONEY AWARDED TO STUDENTS FROM ERIC'S STUDIO.

Eric Bailey has a Master of Music Degree from Southern Methodist University and a Bachelor of Music Education Degree from Henderson State University, graduating with Honors. He is a member of the American Federation of Musicians.

Eric was performing professionally at age 15, and doing studio recording session work by age 16. In college he was part of the Collegians Jazz Band that toured the Caribbean entertaining the Armed Forces for USO. Eric has directed bands in Arkansas, Missouri and at Highland Park here in Texas. He has been teaching privately since 1963.

He is the author of THE ERIC BAILEY BAGPIPE METHOD published by Neil Kjos Publishing Company in their LESSONS WITH THE ARTIST SERIES.

Eric has performed professionally for over 50 years and has played in Mexico, Panama, The Caribbean, Cuba and throughout the Continental USA.