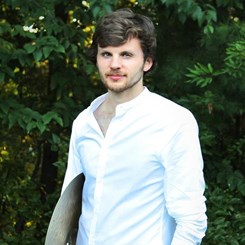 Eric was born and raised in New Hampshire, receiving his first drum set at the age of 12. Beginning to seriously hone his craft in high school, he earned titles as the NHMEA Jazz All-State drummer and recipient of the Woody Herman Jazz Award. His work as his school’s Drumline captain, jazz band drummer, and wind symphonic band percussionist led him to performances in New York, Florida, Canada, Germany, and Austria.

Eric has received scholarships and grants from the National Association of Music Merchants (NAMM) and the Music Business Association. He was also selected as one of 15 fellows of the 2018 Program for Jazz at Ravinia's Steans Music Institute in Highland Park, IL.

Eric has experience teaching students of all ages, playing levels, and genres.