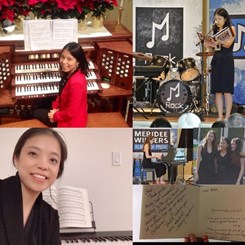 Catholic university of Korea, Southwestern Baptist Theological Seminary, Bachlor of Music, I have completed a Master of Music Performance, bachelors degree in music composition and theory, master of music in organ performance

Grace was one of Top 3 teachers,all-star instructors, at Meridee Winters School of Music in Ardmore, PA. She is currently organist in a local Lutheran Church.

She received her Bachelor of Music degree in Music Composition
in Korea before heading to the US to pursue her Master Degree.
While initially an English major, she followed her heart, switched her focus to music, and has been going full stream ahead ever since. She has studied composition and organ performance, and earned her Master of Music degree at Southwestern Baptist Theological Seminary in Fort Worth, TX.
She received the Dean's Award and scholarships for academic excellence during her undergraduate studies, and was a student staff accompanist for vocal and conducting department at SWBTS.
These successes were a long time in the making Grace,
an experienced church accompanist for over 27 years, began playing piano at age seven.
Her list of musical abilities is a long one: she has studied music theory,composition, piano,violin, ocarina,recorder, Danso (Korean flute), and organ.
She has also taught music extensively in both Korea and the US.
Grace loves kids and travel and teaches piano for Music & Arts Center.
#music #pianoteacher #anaheim #funpianolesson
Photo Albums
Show:
Page of
Photo Albums -
Show:
Page of