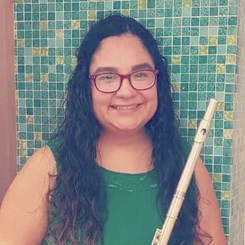 Flor Lizbeth Cruz Longoria is currently pursuing a Master of Arts in Music at the UMKC Conservatory and a Certification in Non-Profit Management and Innovation from the Henry W. Bloch School of Management at the University of Missouri-Kansas City. She holds a Double Major BA in Music Education and Music Performance from Texas A&M University-Kingsville.

As flutist for Valledo Winds Woodwind Quintet, Flor participated in the 2013 Imani Winds Chamber Music Festival as an emerging artist. She was selected as a counselor with teaching and performing assistantships at New York Summer Music Festival (2013, 2014) and Blue Lake Fine Arts Camp (2015). In January 2015, Flor attended the International Higher Education Teaching and Learning Association Convention as a co-presenter of a lecture entitled It Takes a Village: How service learning projects in a small South Texas community have enriched academic, cultural and social development through music.

Flor was the winner of the 2015 TAMUK Orchestral Concerto Competition. That same year, she was selected to perform as first flute in the National Flute Association Collegiate Flute Choir where she worked with Greg Patillo and Project Trio. Flor was selected to perform in the 2016 National Flute Association Convention as part of the TAMUK Flute Choir and was a convention intern for the 2016 and 2017 conventions.

She performs with Mariachi Oro de México KC, Midwest Chamber Ensemble, a Kansas City organization dedicated to the performance of orchestra and chamber music, and with the UMKC Composers’ Guild where she routinely premieres chamber music featuring the flute.

Ms. Cruz foundation, Colectiva Huēhuecoyōtl, has partnered with Latino Arts Foundation and with Faust Theater. Colectiva Huēhuecoyōtl, an organization that consists of a collective of soloists and chamber groups that offer music performances to events sponsored by nonprofit organizations that cater to marginalized communities. As a separate concert series, the proceeds generated by ticket sales are donated to said organizations.

She has been teaching privately and coaching chamber ensembles since 2010.