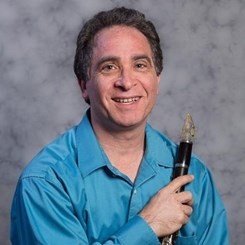 You don't get harmony when everybody sings the same note.
~Doug Floyd

Fred Jacobowitz received his Bachelors and Masters degrees from the Juilliard School, where he studied with the late Leon Russianoff. He made his New York Debut at Carnegie Recital Hall (now Weill Hall) as winner of the Artists International Competition. He was a featured soloist on radio stations WBAI and WQXR in New York City, with the Goldman Band, and in recital throughout the Metropolitan New York area.

As a chamber musician, he has participated in the Marlboro Music Festival and played in the Verrazano Winds Woodwind Quintet in Brooklyn, New York. Mr. Jacobowitz was Principal Clarinetist in the Annapolis (Maryland) Symphony Orchestra from 1989-2002. He is equally at home in the worlds of Classical, Jazz and Folk, having performed and recorded with his Kol Haruach Klezmer Band and his duo, Ebony and Ivory. He has performed as recitalist and soloist throughout the US and Canada and in Panama.

Mr. Jacobowitz now resides in Raleigh, NC, where (when not performing out of town) he is a machinist. He teaches and freelances, and he can often be heard playing concerts with his wife, North Carolina Symphony Principal ‘Cellist Bonnie Thron. In addition, he performs as half of the Jacobowitz-Larkin duo with pianist Anatoly Larkin. He runs his own business, Case Closed <www.case-closed.us>, fixing musical instrument cases and is a professional Little League Baseball Umpire.