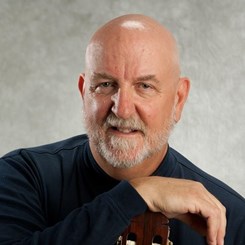 "In this life you cannot do great things.  You can only do small things with great love." - Mother Theresa

"There are only two types of music - good and bad."  - Duke Ellington.

I enjoy all genres of music (so long as its good)

My first instrument was the accordion and I began lessons in 1957.  In 1961 I switched to guitar to be able to play Rock ’N Roll in a band.  I formed my first band “The Countdowns” in 1962 and began playing professionally.

In 1964, I began teaching guitar.  I attended Cuyahoga Community College and transferred to Kent State where I earned my Bachelor of Arts in Music in 1970.

I played in the Pitt Orchestra for “Kenley Players” in Warren Ohio in 1973-74 as well as performing with local bands in Cleveland.

In 1978 I formed a nine piece dance band known as “Special Blend.” Here’s our promo video from 1995.  https://youtu.be/q6ENpoRpa-A
The success of that band lead to a second band named “Special Request” in 1985. See them at http://www.specialproductions.net/  In 1989, I incorporated Special Productions Inc. as a full service Music Entertainment Agency where I supervised and managed 32+ musicians and band leaders of varying talent and temperament.  We booked local, regional, and national acts as well as bands, DJ’s, string quartets, steel drums etc. in the Cleveland area.  We also began doing original music for commercials.  I formed “Special Effect” (https://youtu.be/wrXK3x8n0FI) and “Special Event” in 1998.  All of these bands could be expanded to 14 piece dance bands and performed in a 5 state providing music for “high end” private and corporate clients.  I sold Special Productions in 2006.

I was an adjunct faculty member at Youngstown State University Dana School of Music from 1984 to 1999, where I taught classical guitar, guitar class, and guitar ensemble.  While there I took classes toward my Master’s of Music Degree which is nearly complete.

I was adjunct faculty at Kent State University Department of Journalism from 2001 to 2004 where I taught video editing.

I have taught guitar, banjo, bass and ukelele at the Willoughby School of FIne Arts from 1973 to 1995 and from 2010 to the present.

I was adjunct faculty at Cleveland State University from 2012 to 2015 where I taught guitar to Music Therapy Majors.

I taught  at Cuyahoga Community College/Young Audiences Summer Artworks Program from 2013 to 2015 as a Master Teaching Artist where I taught Jazz Theory, Jazz History, and Music Business to High School Students.

I have been adjunct faculty at Lakeland Community College from 2003 to the present, where I teach Music Appreciation, Song Writing, Music Business, and private guitar.

I have been teaching at Olmsted Performing Arts since 2014. OPA has merged with Baldwin Wallace University and I am now Adjunct Faculty at B.W.

I spend time racing sailboats during the summer and working on my guitar skills.