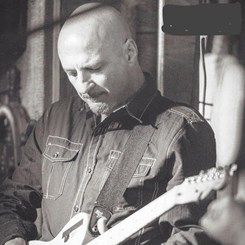 I was born in Porto Azzurro, a beautiful village in Isola D'Elba, Tuscany, where I studied guitar for the first ten years. In the 80s, in Florence, I studied jazz guitar and took master classes with various artists including John Scofield, John Abercrombie and Jim Hall at Ravenna Jazz. I also studied Jazz Composition and Arranging for Jazz Big Band, Theory and Solfeggio, Classical Guitar and Complementary Harmony at the School of Music of Fiesole and graduated at the Conservatories of Florence and Ferrara. In those years I played many different music genres (jazz, blues, rock, pop, dance) with dozens of bands as an acoustic, classical and electric guitar player, both in live tours and in TV shows with internationally recognized Italian pop artists such as Irene Grandi, Laura Pausini, Gianni Bella, Paolo Vallesi and Enrico Ruggeri.

In Rome I played guitar with the locally famous dance band Illi Vanilli, and I collaborated with dance and chill-out artists such as Harlem Hustlers, Joker Juice, Gino Woody Bianchi and Formentera 13:15 as a guitar player, arranger and mixing-recording engineer, under the pseudonym of "Cyan K".

In 2011 I moved again, this time to Los Angeles where I graduated in Film Scoring at UCLA Extension, and collaborated with the composer Simone Giuliani. Then, I went to Minnesota where I was part of the university's jazz ensembles and earned a Master's of Music in Performance at University of Minnesota Duluth.