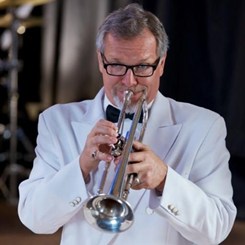 Originally from York, PA, Greg Reese began playing professionally at age 16.  After graduating from Towson University, and 2 years freelancing, he auditioned and won a position with the Jazz Ambassadors of the U.S. Army Field Band, the premiere touring jazz ensemble of the US Army.  Greg retired from the military in 2000 after 20 years of worldwide touring and recording with the Jazz Ambassadors, and has continued his freelance career. Greg has been  teaching trumpet at Music & Arts at the Severna Park and Bowie locations for the past 14 years.