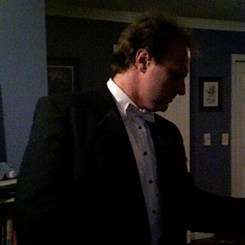 Born into a musical heritage, and the youngest son of the late Principal National Symphony Bassist H. Stevens Brewster, Jr., Lee received his B.M. in Violin Performance at the Philadelphia Musical Academy in 1991.  He studied violin with Assistant Concertmaster William de Pasquale and Section Violinist Frank Costanzo of the Philadelphia Orchestra, and Assistant Concertmaster Elisabeth Adkins and Concertmaster William Steck of the National Symphony Orchestra.  He then furthered his Chamber Music and Master Class studies at the Curtis Institute of Music, Temple University, Catholic University, Shenandoah University, The University of Maryland, and Peabody Conservatory.  In December of 2000, Lee had the honor to premier the Barber Violin Concerto in Vidin, Bulgaria.  In 2008, Lee has released his debut recording of the Rode 24 Caprices for Solo Violin, which is currently available on Itunes and CD Baby.  He was a member of the Richmond Symphony violin section from 1991 to 1997, and is currently a member of the Maryland Symphony violin section since September 2001.  He served as Concertmaster of the Piedmont Symphony Orchestra from 2010 to 2014, and was lead violin in String Quartets on board the Celebrity “Infinity” Cruise Ship in 2010, and the Holland America’s “Oosterdam” Cruise Ship in 2011.

Now devoting the majority of his time teaching, Lee has published a violin scale book “The Brewster Scale Method”, and is now available on Amazon.com as well through Music and Arts.  Lee served on the Violin Faculty at the Levine School of Music in Washington DC from 2012 to 2014, and is currently on the Violin/Viola faculty at the Landon School for Boys in Bethesda.  Lee is very excited to be now a teacher at Music and Arts at the Rockville Maryland and McLean Virginia stores.