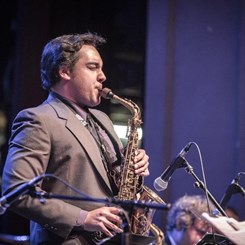 He also received a 2013 DownBeat student award for his arrangement of “Fables of Faubus” written by Charles Mingus; and was spotlighted in an interview in the magazine.

During his senior year in college, Howard was awarded the grand prize winner of the 2016 Saxophone Idol competition sponsored by Buffet Crampon and Julius Keilwerth. He also won a 2017 Downbeat award as an undergraduate “Outstanding Soloist”. In late June, he was selected nationally, as a Yamaha Young Performing Artist and performed at the Music For All Symposium in Muncie, Indiana.

Howard is a graduate from the University of North Texas, where he studied under Brad Leali and was a member of the seven time Grammy nominated One O’ Clock Lab Band.