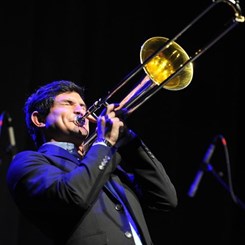 My objective is to create and teach music with excitement and energy in all settings and genres.

Trombonist Ian Kaufman, 21, originally from Poway, California, is a senior at Temple University’s Boyer College of Music in Philadelphia where he plays solo trombone in the top jazz ensemble under the direction of Terell Stafford and studys privately with Joe McDonough. He was exposed to jazz early on by his middle school teacher, Dr. Ella Steinberg, and began to play jazz all around the community, even playing with the University of San Diego Jazz Ensemble at the age of 13. In the summer before his freshman year of high school, Ian attended the Idyllwild jazz workshop where he studied under Jeff Tower, Lee Gause, David Beatty, Marshall Hawkins, Jeff Jarvis, Matt Harris, and several others. Here he found a new passion for music and continued to attend the workshop each summer until college.

Throughout high school, Ian studied privately with Vince Hernandez, Christopher Hollyday, Tim Saeger, Andy Geib, Arturo Velasco and Scott Kyle. He formed and led his own jazz quartet, performing with Gilbert Castellanos and his Young Lions Series in San Diego’s beautiful Balboa Park. Another group Ian performed with and fronted regularly through his high school career was Juvy Jazz, an eight piece jazz combo that played for the elderly at retirement homes and at local restaurants. Ian began teaching young trombone players in his freshman year of high school and continued to gain more students, eventually taking a teaching position at Nick Rail Music Studios. At Mt. Carmel High School, Ian continued to grow as a musician playing in all the top ensembles and in his senior year becoming the drum major of the marching band. Ian was a featured soloist with his high school jazz band, playing “Misty” on the school’s 2015 record and “No More Blues” on their 2016 record. Ian graduated high school in 2016 earning several awards including the Louis Armstrong Jazz Award and John Philip Sousa Band Award. Ian completed his high school career playing in many honor groups, most notably playing lead trombone with the California All Southern Jazz All Star Ensemble under the direction of trombonist Steve Wiest, principal in the California All-State Symphony Orchestra under the direction of Jung-Ho Pak, and touring Japan as lead trombone of the Monterey Jazz Festival’s Next Generation Jazz Orchestra under the direction of saxophonist Paul Contos.

With the Temple Big Band, Ian has played at venues such as the Kimmel Center for the Performing Arts and several of Lincoln Center’s stages including Dizzy’s Coca Cola Club, Appel Room, and Alice Tully Hall. Ian has performed 3 years with the Mid-Atlantic Collegiate Jazz Orchestra at the Mid-Atlantic Jazz Festival and the Kennedy Center for the Performing Arts under the direction of Delfeayo Marsalis in 2017, Warren Wolf in 2018, and Brian Lynch in 2019. In 2018 Ian was chosen as one of only eleven winners of the very highly competitive Yamaha Young Performing Artists Competition, where he played for an audience of over 2,000 people in Indianapolis. Most recently, in 2019 Ian was selected as one of only 3 finalists in the prestigious Jazz Soloist competition of the American Trombone Workshop. Outside of school, Ian is teaching trombone and playing at some of the best venues in Philadelphia and the surrounding area as a freelance trombonist including BVT Live!’s Big Ric Rising Wedding Band and several other groups of a wide variety of styles. Ian will begin his masters in jazz performance at Temple in January of 2020.