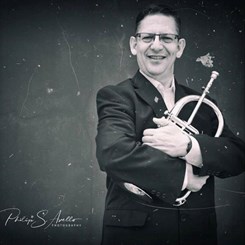 Jack Wengrosky, D.M.A. - is a professional trumpet player in the Nashville Metro area and recently recognized for his participation as lead/section trumpet in “American Dreamers” which won  a 2018 Grammy for Best Large Jazz Ensemble. He was the 1st trumpet, soloist and clinician from the US Army Field Band Jazz Ambassadors, the Army’s elite touring orchestra until his retirement as a Master Sergeant in 2013. Jack Wengrosky has toured 49 states and  over 40 countries, and made appearances with seven major symphonies including Baltimore, Cincinnati, the Boston Pops and performed for the last six Presidents of the United States, the Queen of England, as well as numerous TV and radio appearances.

Jack received his DMA at the University of Miami, MM at the University of North Texas where he was lead trumpet in the prestigious One O’clock Lab band, and a BA in Business Admin and Music at Elmhurst College. His teachers include Don Jacoby, Arnold Jacobs, Bobby Shew, Keith Johnson and Rich Corpolongo, and Doug Beach. He has over 25 CDs to his credit as well as having performed with Cheap Trick, Diane Schurr, Doc Severinsen, Freddie Hubbard, Joe Williams, Barry Manilow, and many more. Jack was formerly the Director of Bands at Miami Arts Charter, instructor at Frisco ISD, Loyola Blakefield Academy, and Ransom Everglades Academy.