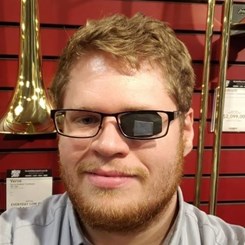 Hello!! I am Jacob. I remember as a young kid going to see my sister perform in the marching band at Boerne High School from there my interest in music began. During the 6th grade I began concert band, the first instrument I attempted was the trumpet, but I later switched to the trombone, once I became a freshman I not only witnessed my brother perform in the same marching band as my sister but as an added bonus during that time I marched alongside my brother and it was the first year that Boerne HS went to State, a moment I would never forget and one that prompted me to consider studying music in college.

Sadly, after my freshman year, I had to move to Dallas Tx, where I attended the Jesuit College Preparatory School (of Dallas), to finish the remaining years of my high school career. One of the most important things for me to have after this move was to ensure that my musical career didn’t end. It was this time that I discovered how important music was/is to me, so much so that it solidified my decision to major in music. I attended the University of the Incarnate Word and graduated with a Bachelors of Arts in Music, though originally, I was studying to be a Music Educator, which is still a work in progress.

Overall, I have been playing the trombone for 15 years and I currently participate in the Pride of San Antonio Showband and hold the Trombone Section Leader Position. Music has always been a safe haven for me growing up and it still is, its where I find the most happiness in life, to come together with friends and experience such creation, beauty, and emotion(s), that all of us enjoy, so much so that the Pride of San Antonio Showband is filled with people that become family. This group has opened so many doors for me and reminded me of my passion, which is everything and anything involving music.

Music has been a part of my life for so many years, and many more are to come, I am a very friendly and approachable person so please don’t be afraid to ask me any questions that you may have or even if it's just to say hello. I strongly believe in the power that music has, can create, especially when everyone comes together for one purpose……to make music.