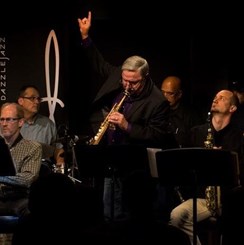 JIM STRANAHAN is a Denver Colorado based jazz recording artist with Tapestry Reocrds. His discography includes his 2010 CD release FREE FOR ALL featuring all original compositions by Jim He has also recently released his second 2014 CD release MIGRATION TO HIGHER GROUND. Both CD, s have received national acclaim. He also appears on two of his son, Colin Stranahan, internationally known drummer, CD's DREAMS UNTOLD, and TRANSFORMATION.  Over his 40+-year career as a bandleader and musician in the Denver area he has performed with Bob Hope, Rosemary Clooney, Suzanne Sommers, Lee Konitz and Bobby Shew. Jim is a featured performer at the legendary Dazzle Jazz Club in Denver performing his original compositions and arrangements.  He is available for composing and/or arranging for any musical situation.

Jim is a sought after clinician, adjudicator and private saxophone instructor in the Denver area.  He has worked in the larger Denver metro school districts doing clinics, workshops, and sectional rehearsals and is available as a clinician for elementary through college level students.

Many of Jim's past students have gone on to become successful professional musicians. Students in his private studio are often become first chair players in their sections. His students have also been successful in auditioning and being appointed into groups such as COLORADO HONOR BAND, COLORADO CONSERVATORY FOR THE JAZZ ARTS, CONTINENTAL LEAGUE, and ALL STATE BANDS.

Jim can be contacted at jim.stranahan@gmail.com.

The following are quotes from local band directors:

Feel free to use as references.k

"Jim's approach is terrific because he comes at improvisation from different directions with kids who may have differing back ground in theory knowledge.  He'll start with a blues scale approach moving towards a scale/modes concept, but then move to a block harmony idea, having students concentrate on chord tones.  This truly helps kids of all levels of theory background and at the same time makes them realize the connection of what they do in the theory classroom has a lot to do with what they can do in improvisation."

"Jim is so good with all ages of students when teaching improvisation.  Drawing out the most nervous students, he has a great way of making everyone in the room feel so comfortable and safe to experiment and go beyond what they thought was possible."

"Jim Stranahan is what we call in the industry, -THE FULL PACKAGE- ...

He is that rare combination of Master Music Educator, Musician Extradanaire, and just a downright good person."

and his musical performance, instruction and interaction with kids is second to none."

"Many kids are a little intimidated about showing what they know, especially as it relates to jazz improvisation. But Jim has a way of giving kids the confidence to try anything while bringing out the best in them."

"Jim is not only a great musician but works really well with kids!  He's worked several times with my jazz and concert bands and each time there is drastic improvement.  He also teaches privately to a few of my students and they too show a great deal of musical growth throughout the school year."