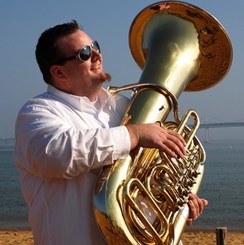 Mr. Johns grew up in the small town of Jeannette, Pennsylvania, located about 20 miles southeast of Pittsburgh.  He started playing trombone in 4th grade, picked up Tuba in 6th grade and continued playing both through high school.  After graduating from Jeannette High School in 2000, he attended West Virginia University where he earned a Bachelor of Music in Music Education in 2004.  During the summers of 2011-2013, Mr. Johns attended the American Band College of Sam Houston State University where he earned a Master of Music degree with a concentration in Wind Band Conducting & Pedagogy.

As for performance, Mr. Johns has played tuba in groups throughout the United States and has shared the stage with artists such as Doc Severinsen, Allen Vizzutti, Maryanne Gedigan, Frank Ticheli & Brian Balmages to name a few.  He is currently performing as the Principal Tuba and a founding member of the Maryland Band Directors' Band as well as with his Brass Quintet, the Chesapeake Brass Authority and occasional freelance performances.

When not teaching or performing, Mr. Johns has a full studio of private students on Trombone, Euphonium, and Tuba.  In those precious few moments each week that he is not working, Mr. Johns enjoys spending time with his wife Karen and daughter Alexandra.  His hobbies include bicycling, swimming and building Lego sets with Alex.