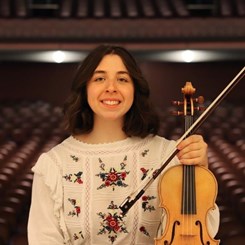 Jessica Bowen is a violinist and strings teacher who lives and works in Troy, NY. A native of Upstate New York, Jessica is an active freelance musician/ educator and has performed with Organ Colossal, Albany Pro Musica, Burnt Hills Oratorio, and College Light Opera Company. She has also performed with the Crane Symphony Orchestra and Orchestra of Northern New York among others throughout New England. In addition to regularly performing in orchestras and chamber groups, she maintains an active performing schedule as a string player and multi-instrumentalist in contemporary groups throughout the Capital Region and has performed with various chamber music groups, opera orchestras, and musical theater productions throughout the Capital Region.

An avid educator, in addition to her position as Music Teacher at Music & Arts, Jessica currently serves on the faculty for the Empire State Youth Orchestra CHIME program as a Site Leader and Strings, Percussion, and Winds teaching artist — a position she’s held since 2018. She has held positions as Music Director at Catholic Central High School and worked for the Saratoga Performing Arts Center,  Guilderland Music Academy, and Rocky’s Music Studio.

Jessica gathers inspiration from various genres of music, spanning everything from 60s rock n’ roll to Indian classical string playing to American folk and electronic music among the western classical tradition. She works to cultivate appreciation for all genres of music, cultures, and traditions in her teaching and performing. Influenced by this music Jessica frequently writes, experiments, performs in these styles.

An advocate for the arts, Jessica strives to help young musicians realize their highest potential, create connections between music and other performing arts, and elevate appreciation for the arts so music will be an avenue of personal exploration for budding young musicians for generations to come. Jessica earned her Bachelor of Music degree from the Crane School of Music and currently studies with Burton Kaplan, former Professor of Violin at Manhattan School of Music.