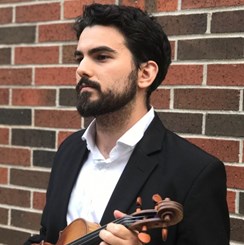 Let's learn, practice and have fun!

BM, MM Jesús Gómez has played concerts in many different countries, including France (Louvre Auditorium), England, Italy, Spain, Germany, the United States, China (Guangzhou Opera House, National Auditorium of Beijing), and the territory of Gibraltar (Governor ́s Palace), where he played for the governor on a 1711 Stradivarius. In the past season, he was principal second violin with the Maryville Symphony Orchestra and Southside Philharmonic Orchestra, and played in the violin section of the Missouri Symphony Orchestra. In 2016, Gómez was a guest artist at the annual convention of the Violin Society of America in Oberlin.

He later studied with Anca Bitan at the Conservatorio Profesional Cristóbal de Morales in Seville, where he concluded the intermediary cycle of his studies. He played with the Orquesta Joven del Bicentenario as concertmaster and with the Orquesta de la Universidad de Granada.

Studying under Dr. Ana Luque, he graduated from the Royal Conservatory of Music Victoria Eugenia of Granada with a bachelor ́s degree in violin performance.

In the field of contemporary music, Gómez played in the premiere of two pieces by Spanish compo- sers Julián García de los Reyes and Pedro Guajardo. The latter recording was broadcast by the National Radio of Spain.

When Gómez was 18, he started his conducting studies with the English violinist and conductor Michael Thomas, and has received advice from Ángel Luis Pérez, Kirk Trevor, Gabriel Delgado, Robert Hart Baker, and Christoph Rehli.

He conducted the Joven Orquesta Sinfónica de Granada, Orquesta German Alvarez Beigbeder of Jerez, the University Philharmonic Orchestra of the University of Missouri, Jefferson City Symp- hony Orchestra, Southside Philharmonic Orchestra and the Filarmonica Banatul-Timisoara (Roma- nia). He was music director of the Philharmonic Choir of Capuchinos and an assistant at the Opera House of Jerez. In the United States, he has held posts as music director of the Mid-Missouri Community Orchestra and assistant conductor of the Jefferson City Symphony Orchestra.

Gómez graduated with a Master in Music (Violin) and a Master in Orchestral Conducting from the University of Missouri, Columbia, where he studied violin performance with Eva Szekely, and orchestra conducting with Edward Dolbashian and Dr. Barry Ford. He was also a violin and orchestral teaching assistant and member of the Graduate String Quartet.

During his time in Missouri, Gómez was a violin and viola instructor with the Community Music Program of the University of Missouri and a teacher in the String Project.