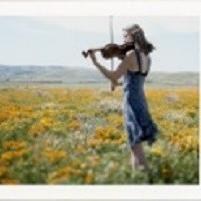 Joanna Storm was born in St. Petersburg, Fl in 1987, and started studying violin at the age of 4. In 2003, she started playing viola in addition to the violin. In 2004, she started learning the basics of cello, and has been studying the instrument intermittently ever since. Her teaching career also started in 2004, when she was hired to teach her first student. Ms. Storm was awarded the William E. Duckwitz Talent Scholarship in 2005, and studied violin with Routa Kroumovitch at Stetson University.

A composer as well as a violinist, Joanna has had several of her compositions performed at Stetson. This includes the harpsichord piece Strength in Pain, which was premiered by Josiah Armes in Elizabeth Hall in the spring of 2007. Another piece is Alles kann ich nicht Sagen, premiered in Elizabeth Hall in fall of 2008, by Wade Meyers.

Ms. Storm graduated from Stetson University with her Bachelor's of Music with Elective Studies in Psychology in July of 2010. She joined the Orange County Symphony as Associate Principle Second Violin in 2011. In 2013, she began teaching elementary string classes in the Anaheim School District as part of the OCS-ACSD orchestra project, and is now the String Teacher Coordinator. Joanna Storm now gives private violin, viola, and cello lessons throughout Orange County.