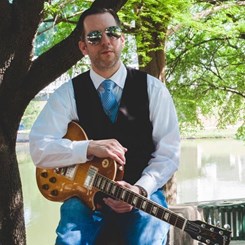 I just released my new album, Working on a new album

John Connor, also known as John 3, has been actively involved in the music industry for nearly 20 years.

John first found his knack for songwriting in high school, and in his second year in college he discovered the music program at McLennan Community College (MCC). That is when he knew he wanted to make music a profession. Upon getting a degree in audio technology, John opened a recording studio, Connor Music Productions, where he produced and recorded dozens of artists from around Central Texas.

After nearly a decade of producing artists, John decided to focus on his music and another one of his musical passions–teaching. He teaches guitar, piano, bass guitar, and ukulele.

When John isn't teaching he is most happy in the studio, writing and recording new material. He released his third album in three years, "The Journey Continues," and his fourth album is already underway.