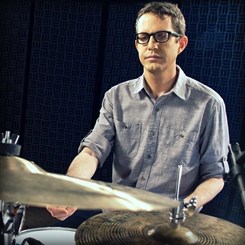 John O'Reilly Jr. has recorded or performed with Jason Mraz, Fun., Jim Adkins, EL VY, The Format, Reubens Accomplice, Jimmy Eat World, Schuyler Fisk, Mandy Moore, Rachel Yamagata, Michael McDonald, Sara Bareilles, Josh Groban, Chris Stills, Matt Maher, and many others. He performed on Broadway for the three-year run of the musical Spider-Man: Turn Off the Dark and has appeared on The Tonight Show with Jay Leno, The Late Late Show with Craig Fergusen, The Martha Stewart Show, The View, and Live with Regis and Kelly.

John has always been passionate about music education and was the drumset editor for Alfred Music from 2006-2011. He is the co-author of Alfred Music's book, On the Beaten Path: Jazz, appears as the on-screen instructor for Alfred’s Teach Yourself to Play Drums DVD and authored a series of instructional videos with Alfred titled How to Play Drums.