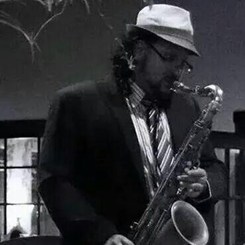 Tenor saxophonist, John Maurice Restrepo, has a musical voice that fits genres from jazz and hip-hop, to latin-jazz and afro-beat, as well as pit and orchestral work.  Originally from Brentwood, New York, Restrepo is a multi-instrumentalist focusing on tenor sax and flute, and also putting in work on soprano, and baritone saxophones and clarinet.  He has worked and recorded with groups including: The JazzCumbia Project, The John Restrepo Quartet, The Welfare Poets, Public Enemy, Blitz the Ambassador, The Skaflaws, Hassan Salam, Zozo Afrobeat Band,  as special guest with the Ron Affif Trio, Rob Murat, Queen Rose, Miss Marie. Also John has made television apearences on FOX’s Fearless Music with Blitz the Ambassador, and heard in the soundtrack for a PBS documentary, Bronx Princess.

Restrepo was a student at New York University, and The City College of New York.  He has performed and studied with Arturo O'Farrill, Ralph Lalama, Rich Perry, Ron Carter, John Patitucci, Ron Mclure, and countless others. Performing with both small Jazz Combos and the Jazz Big bands, as well as the Orchestra playing both flute and clarinet. While a at Brentwood High School, Restrepo quickly set himself apart in a nationally recognized music program.  He was the lead tenor in the Brentwood High School Jazz Ensemble, and selected for the all-county and all-state jazz ensembles as well. Twice, Restrepo lead his high school to the top ten finals of Jazz at Lincoln Center's Essentially Ellington Competition.  Restrepo has travelled throughout the United States and Europe; his extensive performance experience and dedication to different genres make him truly a world musician.