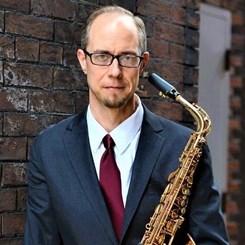 Protean artist John Thomas spans the chasm between the concert and jazz saxophone worlds.  Equally adept at the arts of improvisation and interpretation, he insistently explores the bounds of genre and idiom.

Mr. Thomas is an experienced and effective educator, having previously held teaching positions at the University of Northern Colorado, Washington College, and the Peabody Conservatory. He works with each student to develop strong fundamental skills while also exploring the unique joy of creating music.  He currently teaches jazz and woodwinds at Towson University while maintaining a select private studio.

From his work a jazz saxophonist, to appearances with the Baltimore Symphony Orchestra and beyond, he has refined and expanded his horizons as a performer and educator- a model of the 21st Century musician.

As a classical performer, he has premiered new solo and chamber works both in the US and abroad. He actively performs the standard repertoire of the saxophone, as well new works by young composers and his own works.

As a jazz musician, Mr. Thomas has appeared with such artists as Bob Mintzer, Kevin Mahogany, Slide Hampton, and Michael Formanek. Pop music engagements include appearances with the Jimmy Dorsey Orchestra, Glen Miller Orchestra, Ben Vereen, and Little Anthony and the Imperials. Known for his deep lush tone and intensely swinging style, Thomas delights fans of the jazz tenor saxophone. His jazz quartet deftly blends respect for the jazz tradition with a view towards modernism and innovation.

In the Baltimore/DC area, Thomas enjoys an eclectic performing career. From pop groups, funk bands and R+B artists to symphonies, chamber groups, and improvisational collectives, his unique voice on the saxophone is in constant demand. He has performed at venues including Meryerhoff Symphony Hall, Wolf Trap, the Strathmore, Twins Jazz, and Bethesda Blues and Jazz as well as numerous small clubs, concert series, and house concerts.

He holds a double Masters of Music in Jazz Studies and Saxophone Performance and has completed the coursework for the doctoral degree in classical saxophone performance at the Peabody Conservatory.

John Thomas is a Vandoren Artist Clinician and performas and records with Vandoren reeds and mouthpieces.