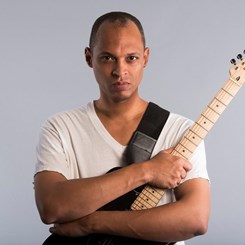 Jonathan Townes is an American composer, guitarist, singer, producer and engineer. He attended Berklee College of Music in 1988, majoring in Jazz composition. While at Berklee, Jonathan began writing jazz tunes, many of which are included in this book --> http://bit.ly/2LRtZuj

After moving to Brooklyn, NY (1998), he began playing occasional gigs in and around New York City. It was around this time he began recording music at Peter Karl Studios which ultimately led to a job there, as a recording, mixing and mastering engineer. He has since produced 9 self-released projects for his Giglaeoplexis record label.

Jonathan also played with Ray Greiche (Redshell); producing, mixing and mastering Redshell's eponymous debut release. The recording of Redshell marked his transition from jazz/improvised music to rock/pop/electronic music, culminating in the release of Lookatchurself Reggie Measuresworth. You can read reviews of that CD, here --> http://bit.ly/2z0jGKe, and listen to a live Soundcloud demo here --> http://bit.ly/2kGU2Yy.