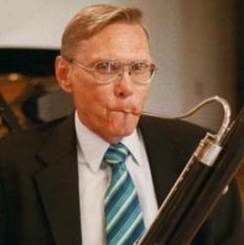 I was a professional musican specializing in all of the winds. Mostly Clarinet Sax and Bassoon, I have also played the Euphonium with the local Brass Band and with the Southern Arizona Symphony Orchestra

Joe DeRaad started his musical career as a 10 year old on Alto Saxophone. By age 15 it was evident that he had a flair for wind instruments and the band director sent him home with a bassoon for summer vacation. A year later, he started his professional performing career playing bassoon with the Rochester Symphony Orchestra in Rochester, MN.

He received a scholarship to the University of Minnesota for bassoon, where he was Principal Bassoon in the Symphony Orchestra and the Concert Band Ensemble. He also played saxophone, clarinet, and  bassoon professionally in the Minneapolis/St. Paul area, including Broadway shows like “Hello Dolly” and many others, and was a member of the sax section of a Big Band.

Joe also played Principal Bassoon with the Minneapolis Civic Symphony and the St. Paul Civic Orchestra. During this time, he taught private students and was the Conductor of a 15 piece beginning band at a private school. He graduated from the U of M with a Bachelor of Science degree in Music Education and earned the license to teach all aspects of music in Elementary, Junior High and Senior High Schools.

He was then inducted into the Army and spent 2 years playing clarinet, saxophone, and bassoon with the Army Bands. He played with the Concert Band, Big Band and Small Jazz Ensemble. He was also called upon to contribute arrangements for the bands and to conduct as a sub.

After his service, he taught band and choir in a K – 12 school in Northern Minnesota. Displeased with the cold winters, he moved to Southern California and became involved in the music business in the Los Angeles area, where he became the Manager of a large Band Instrument retail store and then an Import/Export company which handled musical instruments and accessories.

After retiring, Joe moved to Northern California and did some private teaching in the small town where he lived. In 2006, he moved to the Tucson area and started actively playing his instruments. He joined the Tucson Concert Band and played Euphonium with them for a year (he says he had always wanted to play a brass instrument with a band). At the same time he played Bassoon with the Green Valley Concert Band.

He was then invited to play with the Old Pueblo Brass Band and was the Solo Euphonium player with them for 7 years. He formed a Tuba/Euphonium Quartet and Trio, and started arranging and composing for various ensembles and bands; many of these arrangements have now been published at Cimarron Music Press.

Concurrently, he held the Principal Bassoon Chair with the Southern Arizona Symphony Orchestra and has served with them for 7 seasons, including a 10 day tour of China. Joe's background and education help him create fun and enthusiasm at lessons for all of the wind instruments, playing all types of music.