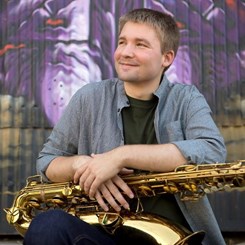 I believe in bringing my professional experiences performing saxophones, clarinets, and flute, combined with my experiences of writing music and leading bands to our lessons with a student-first focus.

Joseph’s musical background includes studying classical saxophone with Joe Lulloff and jazz saxophone with Diego Rivera at Michigan State University, through which he has had the opportunity to work with artists such as Etienne Charles, Rodney Whitaker, Harvey Mason, Michael Dease, and Mark Whitfield. Currently, Joseph leads his own 17-piece big band and is an avid and in-demand saxophonist, clarinetist, and flutist in the region. As a teacher, Joseph brings his performing experience and years of study together to guide students on their own path.

When not leading his own bands, Joseph is working avidly as a composer, arranger, saxophonist, clarinetist, flutist, and copyist. Joseph’sarrangements have been performed by many world-class musicians, including Etienne Charles, Rodney Whitaker, Mark Whitfield, and Harvey Mason, as well as commissions by Rodney Whitaker for the Dr. Phillips Jazz Orchestra, Michael Dease, the UNT Jazz Trombone Ensemble, and the Sencalar/Glassman Quintet. Currently residing in Asheville, NC, Joseph is one of the most in demand saxophonists, clarinetists, and flutists in the region. With a goal of assisting bandleaders, Joseph works regularly as a copyist, most notably with Etienne Charles.