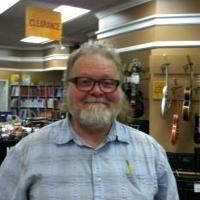 The world of Music is like a giant Chinese buffet. Why would you want to only eat the eggrolls?

I have also been lucky enough to tour with the Broadway production of 42nd Street. With that show I played in many amazing venues, including: The Muni, St. Louis, MO - the largest outdoor theatre in the world; The Queen Elizabeth the 2nd in Vancouver, BC. On the School Band of America tour we played at other great venues. Among them were: The Mozarteum  in Salzburg, Austria; The Casino in Baccarat, France; The Brewers hall in Pilsen, Czechoslovakia; and the Main Concert Hall at the BBC in London, England.

I was blessed to be a part of the amazing faculty at the Ohio State University Music Department. I taught there from the fall of 1990 to the summer of 2007. Many of my students have enjoyed careers as musicians and educators.

Columbus, OH has been my musical playground for many years. i haveplayed in most of its many venues, some quite grand, some quite disreputable.

I am so happy to now be a part of Music and Arts. I have enjoyed my association with the company and all of its teachers and employees for many years. I feel that I can recommend it to music enthusiasts of all ages. Hope to see you soon.