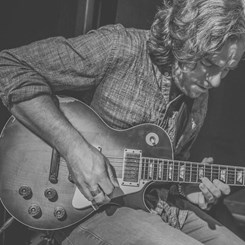 Joshua Hill hails from the proverbial 'one stoplight' town in the Southeastern Ohio village known as Lewisville-population 176. Joshua started playing guitar at age 13 and was immediately enamored with the sounds of Led Zeppelin, The Eagles, Stevie Ray Vaughan and particularly anything that was injected with the blues tradition laid down by masters such as B.B. King, Robert Johnson and Albert King. At the same time studying classical guitar from a teacher over an hour away in St. Clairsville, Josh became versed in the music of Fernando Sor, Francisco Terrega and Andres Segovia.

In 2001 Joshua was awarded the first guitar performance scholarship at West Virginia University. This was his first encounter of bebop and modern jazz stylings and would ultimately be a life changing experience that led to the attendance of the Ohio State University in 2003. There Joshua was awarded two performance scholarships, and met many of the musicians he currently plays with in and around the Columbus, Ohio area.