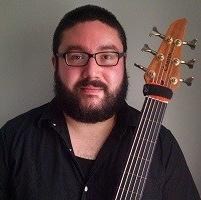 National tour with Aborted - 2012, Television appearances on NBC's The 10! Show and USA's The Choir, Musical Theater in Philadelphia since 2006, Former faculty with National Guitar Workshop

Joshua began his career in music at age 7, when he started taking viola lessons. He hated it, and promptly quit.
The following year, he started taking alto saxophone lessons, which he loved. Josh continued to play alto and tenor saxophone until 10th grade, when he switched to the bass clarinet (and its granddad, the contra-bass clarinet). He even played tuba for a year in 12th grade!
Josh came to his current instrument at age 14. Having previously taken guitar lessons and failed, he decided to take up electric bass when the only bass player in his small hometown of Basking Ridge, NJ moved to upstate NY. Thinking, "There's only four strings, I can play that!", Josh convinced his mother to buy him a used Charvel 4-string for his 8th grade graduation. He took lessons for a few months, then decided to strike out on his own. Discovering the music of Primus and Metallica at age 16 opened new doors, and Josh knew at that moment that he would grow up to be a professional bassist. He took over the bass slot in his high school jazz band, joined the orchestra to learn the double bass, attended the National Guitar Workshop for several summers (eventually becoming a full-time faculty member!) and was accepted to the University of the Arts in Philadelphia.
Six years later, Josh emerged with a Bachelor of Music in Jazz Performance and a Master of Music in Jazz Studies. Over the years, he has performed with the likes of Eddie Angel, Sheryl Crow, and even a national tour with Belgian deathgrind act Aborted. He can often be seen performing at many local theaters, including the Arden Theatre, Delaware Theatre Company, and the Media Theatre, among others. He is currently active in the greater Philadelphia area.
Video Albums
Show:
Page of
Video Albums -
Show:
Page of