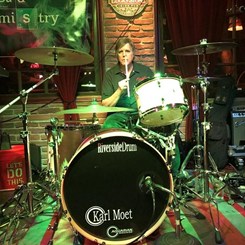 Too many to mention

Everything from Abba to Zappa

Karl was introduced to music by his father who was a professional musician.

By age 9, piano and alto sax lessons where part of Karl’s daily routine. At 12 Karl convinced his school music teacher to let him audition for a spot in the percussion section which led to his father purchasing a drum set for him. Karl explains, “I remember my dad putting a metronome next to me as I sat at the kit and his insistence that I learn to play good time and dynamically.”

Karl started high school working in recording studios in the Phoenix area laying down drums and keyboard parts for local TV and radio commercials. After graduating high school, he crammed a two-year music theory program into one semester and left on a two-year tour playing drums for a band that was opening for Iron Butterfly (In A Gadda Da Vida) (Note: If you were born after 1975 or have never heard this song, reference The Simpsons Episode “Bart Sells His Soul”.  “That was quite a life lesson,” notes Karl. “I was very young and on the road with musicians that were older, crazy and road weary.”

Relocating to southern California Karl produced source cues and music for MTM (Mary Tyler Moore) Productions. In the 1980’s Karl toured the world and performed on many television shows like American Bandstand, Solid Gold and the late-night talk shows as a member of Stacey Q (Two Of Hearts) along with writing and producing music for many major label artists and movie soundtracks.

In 2008 Karl picked up his drumsticks again playing with showbands cruising the southwest casino circuit. Currently you can catch Karl playing drums all over the southwest from casinos to dive bars with too many bands to mention.

Karl shared, “Besides working for M&A part time, I have a large network of pro touring drummers, when they go on the road I pick up all their local work and keep their bands happy. I get to perform with many amazing musicians.”

Karl has dedicated his entire life to music. Come in and talk shop and let him assist you. His specialties include pro audio, recording, songwriting, drums, electronic percussion, keyboards and MIDI.

“I’m a lucky guy,” says Karl. “I’ve been blessed to do what I love for a living. My life is all about music.” "Drop by and let's talk about your musical goals, and gear and lessons."