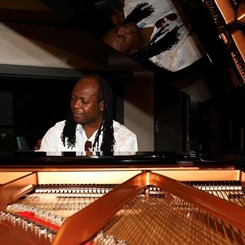 Interested in taking lessons with Kodjo also known as Robezz

I am currently composing music for independent film companies on their latest projects, Up and coming recording projects with a session orchestra in Los Angeles

ALL THAT SOUNDS GOOD

About Kodjo also known as Robezz

Kodjo Attivor aka Robezz's dedication to the piano resulted in several years career as a solo pianist, a sideman, and a bandleader throughout Africa, and Europe and the U.S.A. Kodjo “Robezz” Attivor represented the Africa continent musically at the International Festival of Lafayette, Louisiana in1999. Kodjo studied with Jazz Icons such as Gary Burton, Herbie Hancock, and Chick Corea.

Kodjo's self produced original composition can be found here: