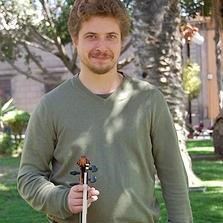 Konstantin Pavlov was born in Ryazan, Russia, March 27th, 1979. Son of a cellist father and a pianist mother, he started his violin studies at the age of six with professor Vladimir Bobilov, continuing his musical studies with him until admission to the Tchaikovsky Conservatory at Moscow.

During his stay, Konstantin was a student of professor Alexander Vinnisky. He belonged to the Moscow Conservatory Great Hall Orchestra and to the Composer Union of Amadeus Chamber Orchestra. After obtaining his Master's Degree in violin education and violin performance in 2003 in Moscow, he was a member of the Russian National Orchestra under the baton of Mikhail Pletnev. Afterward he entered the Moscow Symphony Orchestra under the direction of V. Ziva.

From 2005 to 2013 Konstantin played as first violin in the San Luis Potosi Symphony Orchestra (Mexico). At the same time, he worked as violin teacher in several schools from where he developed and boosted several student winners of national and international competitions. Throughout his career, he has had great opportunities working with the following international well-known artists: Zubin Mehta, Placido Domingo, Vanessa Mae, Julia Fischer, Chick Corea, Gennady Rozhdestvensky, Yevgeny Svetlanov among others.

In addition to all of the international music festivals throughout the world, he has participated in the Velia Festival (Italy), Musicalta (France), Cervantino International Festival (Mexico), as well as diverse cultural events such as operas, ballets, etc. in Germany, Austria, Sweden, Spain, Holland and China. Currently he lives in Round Rock,Texas.