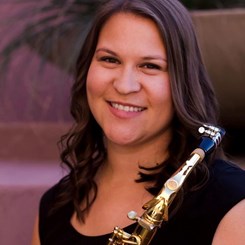 Kristen Zelenak is an active soloist, chamber musician, and teacher from New Baltimore, Michigan. She has won multiple awards including the Central Michigan University’s 2011 Concerto Competition.

Ms. Zelenak is an enthusiastic advocate for chamber music. She has been a member of the Auteur Saxophone Quartet, Lotus Trio, and Seyon Quartet. Her groups have won top prizes at the Coltman Chamber Music Competition (2015, 2019). In 2019, Seyon also won second place at the MTNA National Chamber Music Competition. She has also competed as a semi finalist in national competitions such as NASA, Fischoff, and MPRIZE.

Aside from performing solo and chamber music, Kristen also has experience performing with the Phoenix and Lansing Symphony Orchestras.

Ms. Zelenak is currently pursuing her Doctorate of Musical Arts in saxophone performance at Arizona State University. After completing her Masters of Music degree at Michigan State University, she was an Assistant Band Director for two years in Huntsville, TX. She received her Bachelors in Music Education at Central Michigan University. Her teachers include Christopher Creviston, Joseph Lulloff, and John Nichol.