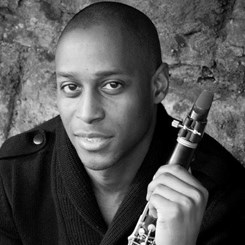 Kwami Barnett is a professional musician, clarinetist, and conductor in Greeley, CO. Mr. Barnett is on the music faculty at Colorado Christian University as Professor of Clarinet, and woodwind instructor at Music and Arts in Fort Collins, CO. He also serves as principal clarinet with the Denver Philharmonic Orchestra. He assists with the music ministry at Faith Church in Fort Collins where he conducts the orchestra, and maintains an active clarinet studio throughout northern Colorado. Mr. Barnett is completing a doctoral degree in clarinet performance at the University of Northern Colorado, studying under Dr. Lauren Jacobson, and a secondary emphasis in Wind Conducting under Dr. Kenneth Singleton. Prior to teaching at Music and Arts, he has performed with orchestras and wind bands throughout the eastern United States including The Ohio Metropolitan Theater Orchestra, West Chester Symphony, Miami Valley Symphony, Sinclair Wind Symphony, Greensboro Concert Band, and here in Colorado with Stratus Chamber Orchestra, and the Gossamer Wind Quintet. Mr. Barnett also served in the United States Army as a clarinetist in Fort Lee, VA. His trio, In-Triplicate, which is comprised of flute, clarinet, and piano, has traveled throughout the Rocky Mountain Region and has premiered several works written for the ensemble. Mr. Barnett has traveled abroad on several international music mission tours to South America, Europe, Jordan, and the Caribbean Islands. He is featured on the recording project entitled “Romeo and Juliet,” with Dana Landry and the University of Northern Colorado Lab One Jazz Ensemble,  and with the University of North Carolina at Greensboro Wind Ensemble on the premiere recording of “The Frozen Cathedral” by John Mackey. Mr. Barnett earned a BA in Music Performance with an education emphasis from Lee University, and an MM degree from the University of North Carolina at Greensboro. His other teachers have included David Schafer, Kelly Burke, Anthony Taylor, and Jason Shafer.