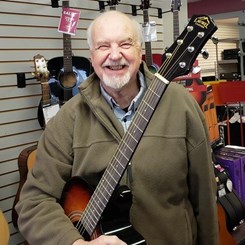 Lee's musical journey began with the trumpet in the forth grade lasting into the eight grade. After a non-musical interim, he began study of the guitar during the eleventh grade, 1952. At that time, Les Paul made many hit recordings that brought new attention to the guitar beyond its hum and strum heritage, or its role as a background instrument.

Lee's study led to an unexpected dedication to the guitar and a subsequent emersion into the depths of the world of music. After attending Baldwin-Wallace College and then the University of Missouri, receiving degrees from both institutions, he studied privately with Phil Rizzo of the Modern Music School in Cleveland, Ohio.

In 1968 Lee joined Frank Gari and Nitondo Productions as an arranger, co-producer, co-composer and as an instrumentalist. Until 1976, this partnership created hundreds of music tracks for advertising, films, television programming, radio IDs and numerous songs. Clients included HBO, Miller Beer, AT&T, Ohio Bell, SOHIO (Standard Oil of Ohio) and Wendy's Old Fashioned Hamburgers to name just a few. Much of the recording and production was done in New York City.

Besides playing in, and leading various commercial bands, Lee has co-led the Nice Jazz Trio with vibraphonist Alan Petersen since 1978. The trio is active in the greater Cleveland area and the Youngstown and western Pennsylvania region.