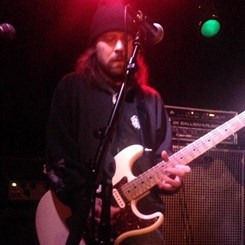 Matt has been teaching guitar for over 27 years and ever since an early age he got interested in music and made his first “recording” at the age of 2 and a half, but it was not until he was 10 years old, after hearing the legendary Randy Rhoads for the first time, that he got serious about playing the guitar.

By the time he was in high school, he was regularly playing in bands, recording in professional studios, and studying Music Theory at a deeper level. He credits his early development to his teachers, Ron Bluen, and Steve Famiglietti, and he aspires to offer his students the same positive influence he received during his formative years.

After high school, he attended the Musicians Institute in Hollywood, California, and from there, he played with bands such as Hollywood Rose (the precursor to Guns N’ Roses), Bruce Bouillet (Racer X, The Scream, Epidemic) and Tommy Chong.

In 2006, he released his solo record “Contributions For An Atom Bomb”. The Album has garnered a cult following and the respect of some of his all-time heroes.

Today, he continues to play live shows, teach, study, write, record and jam on a regular basis. Nothing makes him prouder than jamming with his students and watching them grow as musicians.