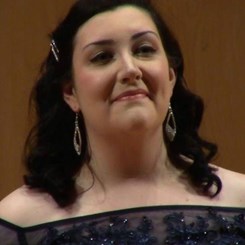 Meghan McGinty, mezzo-soprano, is an award-winning performer from Annapolis, MD with a musical background in clarinet, piano, and flute. She graduated from Temple University with an MM in Vocal Performance and a BM in Vocal Performance from Towson University. In her studies, she had the opportunity to study under Lorie Gratis Harris, Leneida Crawford, and Joy Greene as well as coach with Donna Gill, Valery Ryvkin, and Patricia McKewen Amato.

Her awards include an encouragement award from the Philadelphia District of the Metropolitan Opera National Council Auditions and first place in the NATS Local Competition. Ms. McGinty has been heard in several masterclasses including Arlene Shrut, Margo Garrett, Lori Laitman, Marcus DeLoach, Corinne Winters, David Portillo, and John Moore.

Her stage experience includes La Principessa in Suor Angelica, The Mother in Amahl and The Night Visitors, Third Lady in Die Zauberflöte, Charlotte in Werther, Dido in Dido and Aeneas, Dorabella in Cosi fan tutte, Marcellina in Le Nozze di Figaro and chorus in Opera Philadelphia's Lucia di Lammermoor, La Boheme, The Love for Three Oranges and Verdi’s “Requiem”. She has performed at the Kimmel Center for the Performing Arts as the alto soloist in Michael Tippett’s A Child of Our Time with the Temple University Symphony Orchestra and has appeared as a soloist with the International Verdi Society as Amneris in scenes from Aida, the Philadelphia Concert Operetta Theater and the Rittenhouse Square Committee for the Philadelphia Orchestra.

Currently, she is the artistic director of Celestia Performing Arts, teaches voice and piano lessons in the Philadelphia area, and is an avid performer. Ms. McGinty has been an instructor at Music and Arts since June 2018.