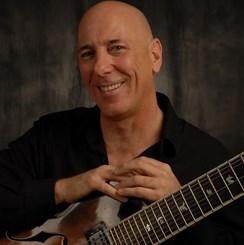 has studied at The Boston Conservatory of Music and The Vienna International Music Center in Austria. He has had private lessons with Sal Salvador, Frederic Hand, jazz master Walter Bishop Jr and Joe Diorio.

Michael has performed at venues such as the Montreal Jazz Festival, CAAS (Chet Atkins appreciation society) festival in Nashville, Namm , major jazz clubs in nyc.(blue note, knickerbockers, The Iridium (as a regular guest invited by Les Paul) Levitt Pavilion in Westport, CT to name a few of the many.

He has been featured in many jazz and guitar magazines, such as Just Jazz Guitar, 20th century guitar, Guitar Player, Fingerstyle Guitar and more, interviewed on numerous radio and television shows and is included as a main entry in acclaimed jazz critic Scott Yanow's book. "The Great Jazz Guitarists". Michael invented the 9 string guitar known as “The Hydra".

Michael has taught at locations such as Guitars Unlimited and Frank Porto Music in Bridgeport, Neighborhood Music School in New Haven, and Bankos in Ansonia, as well as hundreds of private in home lessons in lower Fairfield County.

Below is a review of a Coppola solo guitar album.

Michael Coppola’s current release "Voicings in My Head" is an innovative an inspiring collection of Jazz Standards. Coppola is an exceptionally gifted and virtuosic guitarist. He plays a nine stringed semi-hollow guitar, carefully crafted by luthier James DeCava, and aptly named the Hydra after the nine headed mythological creature. This allows Coppola to create beautifully conceived pianistic chord voicings and lush cascading legato lines. One hears the echoes of Art Tatum and Lenny Breau in the guitarist’s phenomenal improvisations and inventive interpretations throughout the recording. From the swinging "Blue Moon" to the incendiary "Honeysuckle Rose," Coppola never loses focus of the inherent melody of each composition during his masterful sonic excursions. His addition of the Beatles "Honey Pie" and Vince Guarladi’s "Linus and Lucy" make excellent arguments for their inclusion into the jazz cannon as well. The recording aptly closes with a reverential deconstruction of the enduring spiritual "Amazing Grace." Although not exclusively an acoustic album, this release is highly recommended for all listeners of timeless, improvised music. © James Scott