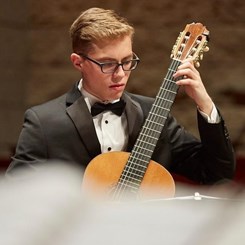 Michael Caracciolo, a native of Woodbridge, Virginia, is a professional classical guitarist who graduated summa cum laude with a Master’s in Music from the University of Cincinnati College-Conservatory of Music (‘19) and a Bachelor’s in Music from George Mason University (‘17).  He studied guitar with Clare Callahan and Larry Snitzler, both students of Andrés Segovia, as well as Matthew Trkula, and has performed in masterclasses for Oscar Ghiglia, Celino & Lito Romero, Carlos Perez, Julian Gray, Matt Palmer, Andrew Zohn, Nigel North, and Colin Davin.  While at CCM, he pursued early music by studying Renaissance lute and vihuela with Rodney Stucky as well as baroque performance practice with Dr. Michael Unger.  Michael also attended Eastern Music Festival in 2016, where he had the opportunity to participate in chamber coachings, lessons, and masterclasses with Kami Rowan, Julian Gray, and Jason Vieaux.

Michael has experience in solo, chamber, and large ensemble performance, and recently toured France and performed at Carnegie Hall in New York City as a member of the United States Guitar Orchestra featuring Bill Kanengiser as soloist, an ensemble founded by the Aaron Shearer Foundation and sponsored by Savarez Strings.  As an educator, Michael studied guitar pedagogy with Clare Callahan and Glen McCarthy, a Grammy-nominated educator in the guitar field, and served as Graduate Teaching Assistant to Clare Callahan in Cincinnati, where he taught students privately and in a classroom setting at the university.  He currently performs and teaches in the Northern Virginia area.