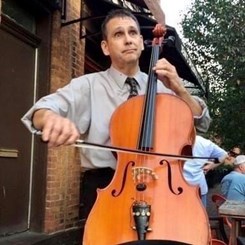 Mike Ingalls was born in 1952 in Ypsilanti, Michigan. He grew up in South Bend, Indiana, where he received his early nurturing in music. He played in All-State Orchestras in two states during high school.(Indiana in 1970, and Ohio in 1971)

After a false start in Physics, Mike went to Baldwin Wallace College ang finished a Bachelor of Music degree witha major in Cello. It was about this time that his musical career took a serious turn for the weird. He started hanging out with folk and rock musicans and developed an appetite for improv and alternative playing that continues to this day.

After a twenty-year career in business, Mr. Ingalls went back to his first love, making and teaching music.  He teaches in Westerville, Lancaster, Logan and spends much time in schools, teaching and conducting special seminars. He has been Principal Cello wth the Welsh Hills Symphony, the Land of Legend Philharmonic, and the Southeast Ohio Symphony. He has played bluegrass tunes on Prairie Home Companion. Along with improvising with guitar players and pianist, he has now begun singing, accompaning himself on the cello. His repertoire includes Beatles, Randy Newman, Stevie Wonder, Tom Lehrer, along with folk songs and Scottish fiddle tunes. In this vein he attends many open mics and plas in both bars and coffeehouses.