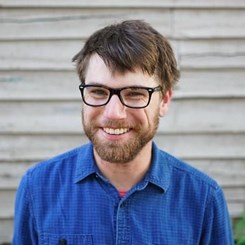 Brett is a guitarist, songwriter, and producer who has been making music in a wide

variety of settings for over 15 years. He has toured throughout the US and Europe and

has worked on many recordings of a vast range of styles. He has also performed at

bands with his friends. After receiving a BA in Biology from the University of Virginia in

2009, Brett realized he had caught the music bug for good and began to perform and

teach guitar full-time in Charlottesville, VA. During this time he studied jazz and

performed regularly on guitar with trumpeter John D’earth, and he also started touring

and recording with many other jazz, rock, and folk bands. Brett then moved to New York

of Music at Queens College in 2015. While in New York he played in several jazz, R&B,

where he studied Brazilian music such as choro, forró, samba, and bossa. These days

with the punk/free-jazz group CGI Jesus. He also performs with songwriter Juliana

and have fun while practicing.