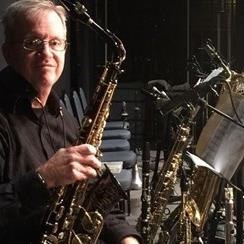 I began my musical career in Southern California when I was in the 6th grade playing clarinet. I later studied music at Los Angeles Valley College and privately with Henry Gruen, Ben Kantor and Don Menza. I began playing Alto saxophone in High School, latter adding Soprano and Tenor Sax, then flute, as I discovered that to be necessary to make a living as a musician.

I was a member of the Southern California based Royal Cavaliers Youth Band from 1968-1972. I have played in concert bands, marching bands, jazz bands, combos, show bands and Dixieland bands to include The Young Americans, Dennis Dean and the Touch of Class, Duane Eddy, Mary Wells, and The Drifters. In 1982 I entered the United States Army as an Army Bandsman completing all levels of musical training at the Army School of Music in Little Creek, Virginia. This gave me the opportunity to play in numerous types of groups, in many places around the world. I retired from the Army after 30+ years of service, and am currently a freelance musician. I currently play with the Snyder Memorial Baptist and First Baptist of Atlanta church orchestras, Fayetteville Jazz Orchestra, and various pit orchestras and theaters around the area.

I began giving private lessons at John Comes Music in Van Nuys, California in 1973, and continued to teach in many various locations while serving in the Army. I began teaching woodwinds at Music & Arts while stationed at Ft Bragg in 2013. I also am occasionally called to mentor the woodwind sections at the area schools. I currently give instruction on clarinet, flute and saxophones – soprano, alto and tenor.

I have spent many years educating and developing woodwind players of all ages, so whether you are new to the instrument or looking to take your skills to the next level, I know what it takes to get you there.