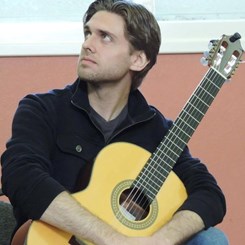 Nathan Nordstrom is a music performance major with an emphasis on guitar.

He began studying the guitar with Chuck Hulihan in 2012 at Glendale Community College. While attending GCC, he also studied music composition with Dr. Robert Albury and Dr. Robert Elser. In 2016, he transferred to Arizona State University, where he originally studied guitar with Frank Koonce and Jonathan Crissman.

He is currently in his final undergraduate semester at ASU, and has been studying both guitar and composition with Jiji Kim for the past year. After completing his bachelor’s degree, Nathan plans to continue his studies at ASU and pursue a master’s degree in music performance.

While at GCC and ASU, Nathan has performed in a number of masterclasses for many of the world's most renowned classical guitarists. Using the insight gained from this, he has won and placed in several large competitions for solo guitar, guitar ensemble, and composition.

As a solo performer, Nathan has considerable experience playing in recitals and concerts. In addition to existing repertoire, he actively performs his own original compositions and improvisations, which draw inspiration from his background in classical music. These are often performed on a 7-string guitar and include elements of flamenco. He regularly uses his ability to improvise in lessons with students to provide accompaniment, create exercises, and to demonstrate concepts via a multitude of examples.

Nathan also has substantial ensemble experience, having performed in duos, trios, quartets, sextets, octets, and orchestras. He has toured across Arizona, performing multiple “world premieres” of ensemble pieces written by prolific modern composers. The large emphasis that he places on ensemble music and working with others has greatly influenced his teaching ability, allowing him to communicate musical concepts with clarity, patience, and understanding.

As an educator, Nathan was employed as the sole music tutor at GCC for six semesters, where he assisted students with guitar, music theory, and piano. Since then, he has been providing private lessons for his own students while actively substituting for other instructors.

Nathan is also extremely well versed in music theory, and has used this knowledge to craft his own complex theoretical concepts. Utilizing these, he has developed alternative means to present traditional music theory in an easily approachable manner. Under the guidance of his current instructor, Jiji Kim, he is currently organizing his own method of applying these concepts to the guitar for the purpose of publication. His comprehension of music theory allows him to explain concepts in various ways to students and to reinforce important foundations of musical understanding.