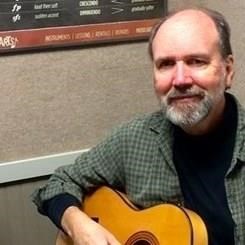 That was the best guitar lesson I've ever had. – Bob B., adult guitar student

Bachelor of Music with a major in Jazz Guitar and a minor in Classical Guitar from the University of Miami; NYS Teacher Certification from Nazareth College of Rochester and Eastman School of Music; Master of Science in Instructional Design from Rochester Institute of Technology

As a guitarist, Norman Tibbils performs in an amazingly wide range of styles including classical, jazz, and world music. Playing classical guitar, Norman has toured the U.S. with the Paul Winter Consort, and playing electric guitar appeared in the hit rock musical Rooms at Geva Theatre. Playing jazz, his full calendar of gigs as a solo guitarist keeps him very busy indeed.

Norman is lucky to count New York City jazz guitar giant Gene Bertoncini as his primary inspiration for learning to play and arrange jazz on nylon string guitar. Bertoncini, who is equally comfortable playing guitar with his fingers or with a pick, gave an inspirational Eastman School of Music jazz guitar seminar in 1974 that sealed the deal for Norman. A month later, he enrolled at the University of Miami as a jazz guitar major, playing both jazz and classical guitar. Once in Miami, Norman quickly began living the double life of music student by day and nightclub performer by night. At one point he was gigging five nights a week while attending classes full-time during the day. “I was part of an extremely exciting live performance scene that included many future stars, such as Gloria Estefan, Phyllis Hyman, Hiram Bullock, Jaco Pastorious, Carmen Lundy, Bruce Hornsby, Steve Morse, Ira Sullivan, Joe Diorio, Pat Metheny, and others. And it was warm in the winter! Who could say ‘no’ to that?”

Returning to Rochester in the early 1980s, Norman’s schedule as a guitar teacher exploded, at one point topping 225 guitar students a week. A deeper study of music education at Eastman and at Nazareth College solidified his “ear-first” approach to teaching guitar.

These days, Norman is busy teaching at Music&Arts in Pittsford, NY, where he has been praised by parents and students alike for his warm and engaging personality, wit, and candor. He spends virtually every waking minute practicing, arranging, writing, teaching, and performing music for his guitar students, and that’s just how he likes it.