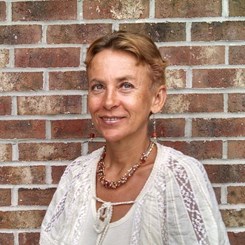 “Almost all children respond to music. Music is an open-sesame, and if you can use it carefully and appropriately, you can reach into that child’s potential for development.”

Oksana Lutsyshyn was born in the city of Lviv, Ukraine.  She began studying music at the age of eight and at twelve she entered the Special Music School in Lviv.  Upon graduating from this school, she moved to Moscow, Russia, where she entered the Moscow State Conservatory, completing both her Master’s and Doctoral degrees.  After moving to the United States, she was a Visiting Scholar at the Indiana University School of Music in Bloomington.  She is presently on the faculty at Old Dominion University and serves as an Artistic Co-Director of the Norfolk Chamber Consort.

Ms. Lutsyshyn has appeared in concerts as a soloist and chamber musician throughout the former Soviet Union, Europe, the United States, and South America.  Locally, she has performed with the Virginia International Arts Festival, Virginia Symphony Orchestra, Ludwig F. Diehn Concert Series, as well as numerous other concert presenters.  She gave her New York debut in the Weill Recital Hall at Carnegie Hall and a Chicago debut in the Preston Bradley Hall at Chicago Cultural Center.  Ms. Lutsyshyn won Second Prize at the Vienna Modern Masters Third International Performers’ Recording Awards Competition.  She has also been a prizewinner at the William Kapell International Piano Competition in College Park, Maryland.

As a chamber musician, Ms. Lutsyshyn has performed in ensembles with prominent musicians such as violinists Joshua Bell and Nadja Salerno-Sonnenberg, tubist Harvey Phillips, saxophonist Eugene Rousseau, and tenor James King, among many others.  Together with her husband Andrey Kasparov, she is a founding member of the Invencia Piano Duo, performing nationally and internationally.

Ms. Lutsyshyn is a prolific recording artist, having worked with the BBC, Vienna Modern Masters, and Contemporary Record Society.  But it were her releases on Albany Records, Hommages musicaux with Hommage à Gabriel Fauré and Ignis fatuus with piano works by Adolphus Hailstork, which have brought her high critical acclaim. The Fanfare Magazine calls her touch “perfect,” while the American Record Guide’s review of Hommages musicaux proclaims, “Hats off to the Kasparov-Lutsyshyn piano duo team for bringing these fascinating pieces to us in their original forms.”  She and Kasparov are currently recording the entire works by Florent Schmitt for piano duo and duet.

In addition to her performing activity, Ms. Lutsyshyn has taught masterclasses in many American universities, including Miami University in Oxford, Ohio, Humboldt State University in Arcata, California, and University of Central Arkansas in Conway, Arkansas.  Currently she teaches piano at the Governor’s School for the Arts in Norfolk, Virginia. She is also a director of concert series at Prince of Peace Lutheran Church in Virginia.